The truth about marine parks and fishing

There is a lot of misinformation out there to scare fishers about the Sydney Marine Park. We reckon Sydney Marine Park will be just like the many other marine parks around Australia, delivering great fishing, great times and the protection required to make it stay that way.

The truth is we already have marine parks right around Australia. Not only do they provide great fishing, many fishos reckon they’re a good idea and they’re working.

It’s ironic some in the fishing media are saying marine parks are the end of the world, yet at the same time promoting themselves  and great fishing in them. Here’s Al Mcglashan in Hervey Bay, on the Great Barrier Reef, at the Abrolhos Islands, and at Port Phillip Bay. Here’s Paul Worstelling at Jervis Bay, Here’s Fishing World Magazine saying Ningaloo is a ‘veritable wonderland of fishing opportunities’.

Did you know that WA’s famous Shark Bay Snapper Fishery has been happening in a marine park for more than 20 years. Wouldn’t you love to go on a fishing trip there?

Did you know the iconic Black Marlin fishery off Cairns has been happening in a highly protected marine park since 2004?

Many of the fishing destinations people dream about because the fishing’s so great have been marine parks, protected with sanctuaries, for years.

Think about reef fishing the Great Barrier Reef, or Ningaloo, big dhufish and coral trout at the Abrolhos, Southern Bluefin Tuna and swordfish in Bass Strait or off Tassie, snapper and spanish macks out of Coffs, giant mulloway and Yellowtail Kings in South Australia. These are real, existing marine parks working wonders right now.

New studies show everywhere marine parks are in place, fishers support them and think they’re doing a good job. Even in the most highly protected and oldest marine parks like the Great Barrier Reef and Ningaloo, with a full third protected from fishing in sanctuary zones, fishos support the sanctuaries by a ratio of 20 to 1! 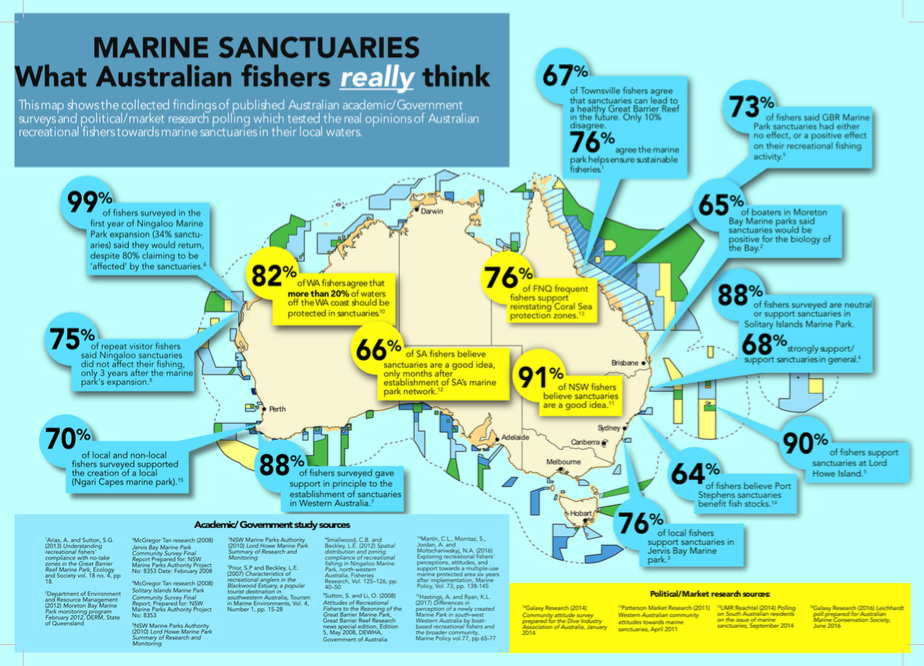 Putting science aside, common sense tells us marine parks have proven not to be a bad thing for rec fishing. Think about Jervis Bay.

If you thought marine parks and sanctuary zones were a bad thing, surely the Great Barrier Reef Marine Park would be the worst of the worst; with 34% of its waters in sanctuary zones over 1000km of coastline. Yet who wouldn’t want to take a fishing trip there? You’ve probably seen some of the TV shows or magazine articles showcasing the region’s world-famous fishing.

In marine parks you lose some spots, but you gain some fish. Brand new science from Port Stephens-Great Lakes Marine Park and the Solitary Islands Marine Park with ~20% sanctuary zones shows there’s more snapper in both the sanctuaries and in the habitat protection zones that are great for rec fishers. The snapper are also significantly bigger in the sanctuaries, so some of best breeding fish are protected. That’s good news for the future. The science is clear and common sense speaks volumes. These marine parks are proven to work, and the fishing’s great too.